Once you've confirmed the result on a pregnancy test, being pregnant is a nerve-wracking time for all mums-to-be and miscarriage is a worry that crops for many of us, causing confusion and fear. But what exactly are the signs of a miscarriage?

A miscarriage is the name given when a pregnancy ends before 24 weeks. If you miscarry in the first 12 weeks of pregnancy (the first trimester), it is called an ‘early miscarriage’ – around three quarters happen in this initial stage when some women don’t yet realise they’re pregnant. A miscarriage after the 12-week mark is called a ‘late miscarriage’.

Signs of a miscarriage

The most common symptom of miscarriage is vaginal bleeding. You’d either have a light brown discharge, or heavy bleeding and bright red blood that gradually reduces to a stop after a few days. Light vaginal bleeding during your first trimester of pregnancy is common, so try not to automatically jump into panic mode. Sill contact your maternity team or early pregnancy unit at your local hospital immediately, just to be sure everything’s ok.

While some light cramps and pain in your stomach area during early pregnancy isn't unusual (after all, your womb is expanding for your baby!), cramping and pain in your lower abdomen may be caused by a miscarriage so it's worth contacting your midwife to get checked out.

3. Discharge of fluid or tissue from your vagina

As with vaginal bleeding, some women pass white-pink discharge while pregnant which may be a cause for concern.

Don't underestimate how well you know your own body. Unfortunately, some women find they have no physical signs of miscarriage and instead simply have 'a feeling.' It is entirely reasonable to contact your midwife if you are concerned.

While symptoms of pregnancy tend to decrease naturally as you move into your second trimester, if you were previously experiencing pregnancy symptoms such as a feeling sick or having tender breasts and these are no longer present early on in your pregnancy, contact your midwife for advice. 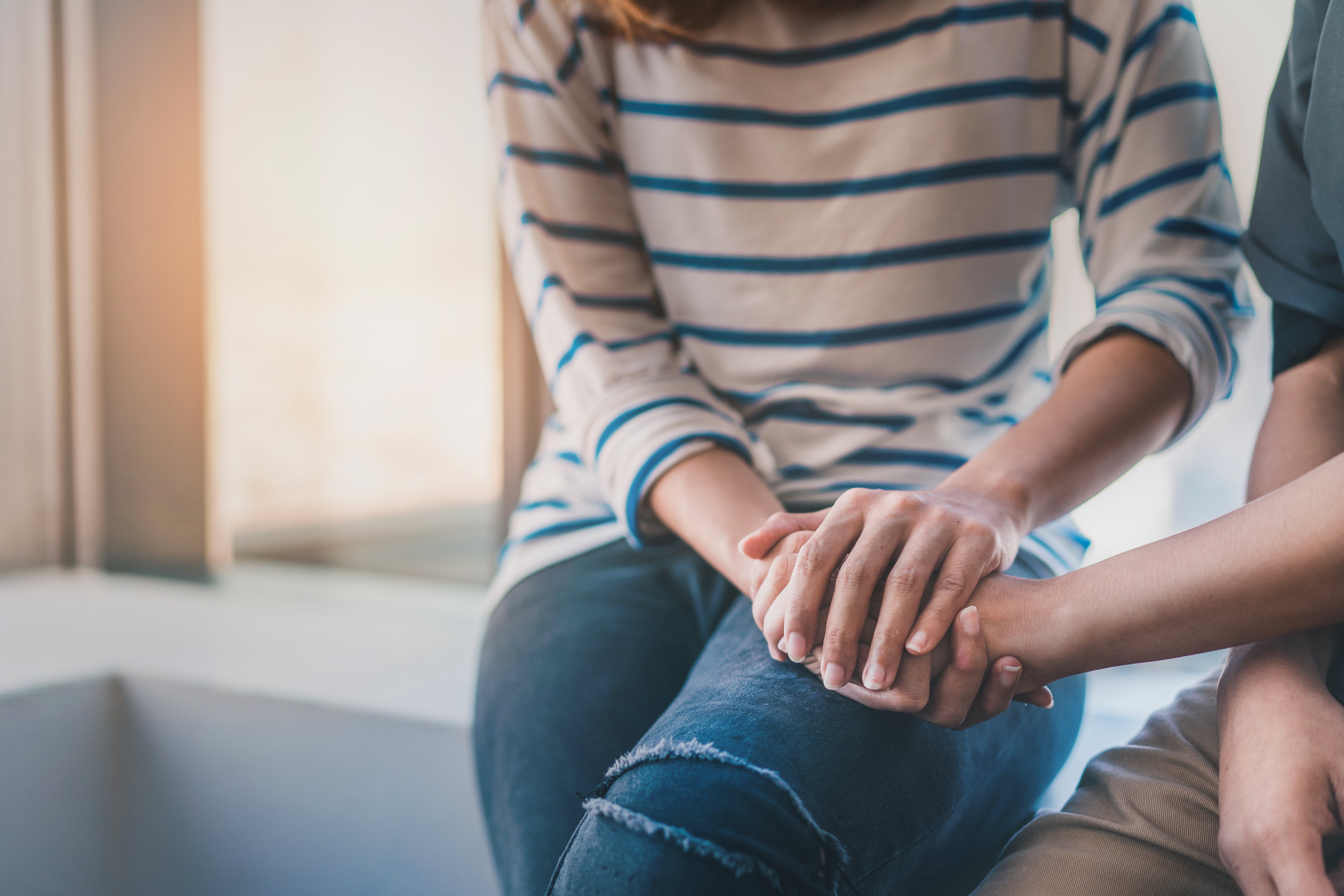 Diana Hamilton-Fairley, consultant in obstetrics and gynaecology, and advisor to the Miscarriage Association says, 'It’s nothing inherited, just bad luck and no-one’s fault. Part of the process has gone wrong though we’re unlikely to know what.’

When can a miscarriage happen?

The majority of miscarriages happen during the earlier weeks of pregnancy before the 12 week mark. You may experience different signs and symptoms of a miscarriage depending on how far along you are in your pregnancy journey.

We spoke to Dr Eleni Mavrides, Consultant Obstetrician and Gynaecologist at The Portland Hospital, part of HCA Healthcare UK, to find out more about how miscarriage symptoms can vary from week to week.

About 3 in every 4 miscarriages happen during the ‘early miscarriage’ stage. For an early miscarriage which occurs between conception and week 12 of pregnancy, the most common symptoms you would expect to see include:

Whilst it is more uncommon to miscarry in the later stage of pregnancy, the symptoms that one might experience if they miscarry in weeks 12 to 24 of pregnancy include all the above, as well as:

If you are experiencing any of these symptoms it is important that you seek medical attention immediately.

The search for the causes of miscarriage

Most parents never find out why their miscarriage happened. The animation below explains how Tommy's, the largest charity funding research into miscarriage, stillbirth and premature birth, is working to improve understanding of the biological processes at work, and finding ways to prevent miscarriages not caused by chromosomal abnormalities.

In many cases you won’t know you've had a miscarriage – it happens before you even know you’re pregnant.

If you’ve had your pregnancy confirmed then bleeding – ranging from brownish discharge to heavy bleeding – and period-like pain are common signs. Sometimes women no longer feel sick and their breasts are no longer tender.

‘If you’ve had any of those symptoms you mustn’t assume it’s miscarriage,’ Diana says. ‘It could be a little blood from the placenta or, if you’ve recently had sex it could be blood from the cells on the surface of the cervix that are more delicate in pregnancy.

‘And nausea and breast tenderness tend to disappear around 12 weeks anyway.’

You might be wondering what is actually happening to your body during a miscarriage. Dr Eleni has described what happens in the womb to help us understand our bodies and the symptoms.

“During a miscarriage, the cervix, which is essentially the ‘neck’ of the womb softens to allow material from inside the womb pass through. This is often seen in the form of bleeding, fluids, and tissues coming out of the vagina. However, sometimes the womb is unable to clean itself, or may still have the foetus inside if the miscarriage has occurred in the later stages, requiring the intervention of medical professionals.”

How long does a miscarriage last?

A woman early in her pregnancy may have a miscarriage and only experience bleeding and cramping for a few hours. But another woman may have miscarriage bleeding for up to a week. The bleeding can be heavy with clots, but it slowly tapers off over days before stopping, usually within two weeks.

The length of a miscarriage differs for every woman, and depends on different factors, including: how far along you were in the pregnancy, whether you were carrying multiples and how long it takes your body to expel the fetal tissue and placenta.

What should I do if I’m worried I am miscarrying?

Contact your GP. He/she will examine you to see if the neck of your womb is opening. If they’re concerned they’ll send you to hospital where you may be given an ultrasound (sometimes performed using a small probe inside the vagina which will not increase your risk of miscarriage if your pregnancy is actually safe) to check the baby’s heartbeat and development. You may also be given a blood test to measure the hormone levels associated with pregnancy.

If you are miscarrying then sadly there’s nothing that can be done to stop it but it’s reassuring to know that should you decide to try again you have exactly the same chance of having a normal pregnancy as before.

Is there anything I can do to prevent miscarriage?

‘We know that being overweight makes it harder to push sugar out of your bloodstream and this seems to affect the development of the baby so if you’re considering pregnancy it might be worth losing a few pounds,’ Diana says. ‘We also know that smoking and drinking isn’t a good idea.’

Eat a healthy diet with plenty of fruit and vegetables and carry on exercising in moderation, she says. While it’s unwise to go from nothing to a marathon overnight there’s evidence to suggest gentle exercise – walking and swimming for example – is healthy during pregnancy.

What is a missed miscarriage?

A missed (or silent) miscarriage is one where the baby has died or not developed but has not been physically miscarried yet. In many cases, there has been no sign that anything was wrong - you will most likely find out at your scan, so the news can come as a complete shock. With a silent miscarriage, you likely won’t have any side effects. Brownish discharge might be present on some occasions. Some women also experience a loss of their pregnancy symptoms.

How common is a missed miscarriage?

Approximately 1-5% of all pregnancies will result in a missed miscarriage.

If you have a missed miscarriage your doctor will explain the next options. You can either:

Your GP will talk with you about what may be the best option for you. Take some time before you decide to let the diagnosis sink in.

Who can I talk to?

Whoever you reach out to, the most important thing is to reach out to someone. Whether that be your partner, a friend, family. While it is a devastating thing to experience, sharing these experiences is vital to understand that you're not alone. There are numerous phonelines, websites and people who will listen and understand what you're going through. Above all, do not lose hope.

‘Remember there’s an 85% chance you won’t suffer a miscarriage and bear in mind even a woman who has had three miscarriages still stands a 65% chance of her next pregnancy being successful,’ Diana says.

Need to talk to someone? Here’s how to get help when you need it