Which Roald Dahl books are perfect for bedtime stories?

Section: Shopping Ideas
Whilst we may receive commission for purchases made through our links, we never allow this to influence product selections.

Do you know what day September 13 is? No, it isn't just any Thursday – it's Roald Dahl Day. To celebrate, I've found all the best children's books, that are perfect for reading to your little one, by none other than the literary genius himself.

One of the world's most iconic children's writers, Dahl continues to be loved by generations of little bookworms. He created family favourites like Matilda, Fantastic Mr Fox and James and the Giant Peach. Dahl sparked imagination in us all; with some of our favourite childhood heroes and the most feared characters coming from his work.

You'll never need help getting your little ones into a bedtime routine again as they'll be excited to listen to the next chapter of the story about friendly giants, horrible headteachers or eccentric inventors. Plus, it's a chance to do something fun together every day.

Instead of exhausting yourself and coming up with ideas on what to do, choose from our helpful guide of the best Roald Dahl books. 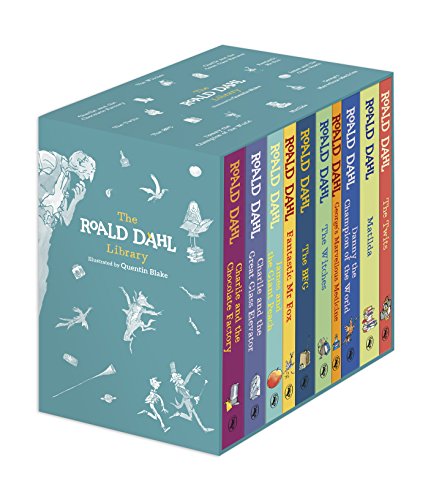 Treat your little one to a whole set of Roald Dahl books; this collection includes:

Charlie and the Chocolate Factory
Charlie and the Great Glass Elevator
Danny, the Champion of the World
Fantastic Mr Fox
George's Marvellous Medicine
James and the Giant Peach
Matilda
The BFG
The Twits
The Witches

The books come in beautiful hardback with foiled dust-jackets, and presented in a lovely giftbox. Does your little boy or girl suffer from nightmares? What better way send them to dreamland than by reading a story about the BFG, AKA the Big Friendly Giant. As the plot unfolds, it's revealed that this legendary character catches dreams, including bad ones. Teach your kids about a little girl who wants nothing more than to read and learn about the world. Although her TV-obsessed family have other ideas, she starts to uncover that she has magical powers and uses them to stop the headmistress's bullying ways. Charlie and the Chocolate Factory

Adapted into one of the best-loved films to watch around Christmas time, Charlie and the Chocolate Factory is loved by kids and adults alike. The book tells a tale of a boy who wins a golden ticket and a place on a tour of Willy Wonka’s Chocolate Factory. Don’t worry; it’s not just jam-packed with sweets! It also teaches kids the importance of family and manners. Farmers Boggis, Bruce and Bean just aren’t quick enough to beat Mr Fox, the sneaky chicken snatcher who moves on to bigger and better thievery, with a bit of a sad ending for his bushy tail. James and the Giant Peach

We’d all like to escape from characters like Aunt Sponge and Aunt Spiker (yikes), and little James does just that when he climbs inside a giant peach for the adventure of a lifetime. This book will spark imagination in your kids as he makes friends with creatures and animals while on his travels. This story will be better for older children and is close to horror as a kid’s fiction book can get. If the Bogeyman under their bed doesn't faze them, then the terrifying child-hating witches will be no problem. Although at one point, it might seem like every child in the world is going to be turned into mice, the bad sorcerers get the comeuppance in the end. Top tip: just be mindful where you pause the story. Before Harry Potter was on the scene, this tall tale has been Inspiring generations of children to create their own potion. When they’re making their own magical medicine, hide everything expensive as they might include anything they can get their hands on, including makeup, mud and maybe even their clothes. Not only will this encourage fun play, but it also teaches your kids how to help grumpy grandmas who need their special medicine. Charlie and the Great Glass Elevator

Did you know that Charlie and the Chocolate factory has a sequel? Picking up where the first book finished, your children will love reading about how Mr Wonka's elevator takes Charlie into out of space, where he and his family are mistaken for being aliens. EEEK! Welcome to The Twits! An evil couple who are known for playing nasty practical jokes on each other. This book will definitely get belly laughs out of your little ones. They’ll love the fact that Mr Twit hides frogs in his wife’s bed, and in return, Mrs Twit tricks her husband by making him gobble down worms instead of spaghetti.

The Giraffe and the Pelly and Me

For me, this is an underrated Dahl classic about a young boy who always dreamed of owning a sweet shop. Billy ends up making new friends from the jungle, until everything goes wrong when a burglar tries to steal the Duchess’s jewels.

This is a magical adventure about a girl who grows up on a farm in British countryside and lives next door to a hunter. But, she has a secret – she has the ability to shoot a beam of energy from her finger when she’s angry. This fantasy book will grab the attention of your kids and have them excited for story time. The final book to appear on this list is also the last to be published by Dahl. The story is about an old man who’s in love with a widow named Mrs Silver. She doesn’t know it yet, but he’s about to win her heart. But, this isn’t just a love story; there’s also a tortoise to look after.

7 reasons why your toddler may be waking in the night

What's your favourite book to read your little ones at bedtime? Let us know on Facebook or Twitter!