Section: Shopping Ideas
Whilst we may receive commission for purchases made through our links, we never allow this to influence product selections. The time has come to add raspberry tea to that long (shopping) list of food and drink products recommended to pregnant women. The benefits of this wonder-product aren't spoken about all that much, though, despite its effects even preventing some women from crying during labour (great if mascara is essential to your birthing plan).

The benefits of raspberry leaf tea during pregnancy

Among many other things, raspberry tea can apparently induce labour, make labour less painful, and, yes, even prevent tears during birth. “Raspberry leaf has been famous throughout history for preparing mothers for childbirth,” says Sandra Greenbank, a nutritional therapist specialising in fertility, pregnancy and women's health. “It is thought to help shorten labour, as it strengthens the uterine and pelvic muscles while also working as a relaxant at the same time, and therefore helps reduce the pain of contractions during labour.”

If you don't like the taste of the tea, you can also take it in tincture or tablet form.  But is it safe? And does it really work? We’ve got all the information you’d ever need to know about raspberry leaf tea here...

Drinking my body weight in raspberry leaf tea. What I love most at this stage is everyone that says "oh, you're still pregnant!" ...because, you see, it's so easy for me to forget through all this waddling around and being kicked in the ribs constantly. 😂 C'mon little lady!

While there are no studies to suggest that raspberry leaf tea can induce labour, by understanding how it works with the womb, one can see how drinking the tea might prepare mothers for birth.

“Raspberry leaf tea is used by many women to help prepare their womb muscle for labour and birth,” says Rachel Fitz-Desorgher, a midwife with 30 years’ experience in infant feeding, active births and working with parents. “The womb muscle contracts regularly day in and day out even when a woman is not pregnant, which is how it keeps toned and fit. As the womb gets ready for the mammoth effort required for labour and birth, the exercise it does picks up, just like a runner preparing for a marathon.

“Raspberry leaf tea is thought to help the womb muscle tone up. There is some evidence that, by getting really toned up and ready for action in this way, a woman is less likely to go past 41 weeks of pregnancy. So although the tea doesn't really start labour, it might help push your body in the right direction by getting the womb fit and strong.”

Is raspberry tea safe during pregnancy?

While raspberry leaf tea is generally considered safe - not likely to bring on premature labour nor to affect the baby - there are a couple of things to watch out for.

“You should be careful if you are taking other medicines before taking raspberry leaf tea as, like all herbal remedies, it can interfere with some other medicines such as those for diabetes and antidepressants,” says Fitz-Desorgher.

“Always check the leaflet that comes with the tea leaves or tablets if you buy it over the counter or, better still, talk to your community midwife. Also, check with your midwife if you are booked to have a Caesarean, have high blood pressure, are expecting twins or your baby is breech.” Are there any side effects to raspberry leaf tea?

When it comes to side effects, experts say raspberry leaf tea is usually safe for both mum and baby.

“Apart from some women really not liking the taste of the tea, there do not seem to be any side effects for either mum or baby,” says Fitz-Desorgher. “The tablets might take a little longer to work because they have to break down in the gut, but they are a good alternative for those who can't stand the tea!”

Laura Southern, a nutritional therapist from London Gynaecology, says that while there is no scientifically proven evidence to suggest that there are any side effects, some women report an increase in Braxton Hicks, or a change in bowel movements.

As with so many forms of treatment, the tea may work for some and not for others. However, Fitz-Desorgher says, according to one study that gave some women raspberry leaf tablets and some a placebo, more women in the "real thing" group went into labour on time.

“So although the study didn't show a big difference in the length of pushing times between the 'real thing' group and the placebo group, it might just be that, as well as reducing the likelihood of going overdue, raspberry leaf tea might also slightly reduce the chance of forceps and ventouse.”

Southern says she personally found the tea helpful with her own children’s birth. “I drank raspberry leaf tea two to three times a day every day from 36 weeks labour with both my kids and I had very quick 2nd stage labour, with no intervention, tears or grazes,” she says. “I put it down to the tea, but who knows?”

When to start drinking raspberry leaf tea during pregnancy?

It’s important to make sure you wait until the recommended date until you start to drink raspberry leaf tea. “The general advice is to wait until 36 weeks gestation to start drinking raspberry leaf tea, or taking the capsules, and this is because there is a worry about its impact in pregnancy,” says Southern. “One study, which was on rats, found that rats taking raspberry leaf extract right from the start of their pregnancy gave birth to babies who reached puberty earlier than those not given it. However, no human studies support this.”

Greenbank agrees that waiting to drink the tea is best, and she advises starting from 32 weeks rather than 36. “Some medical herbalists caution that you should be careful taking it early in pregnancy, as it stimulates the uterus so in theory could bring on a miscarriage, although there are no studies on this,” she says. “It is traditionally advised to start taking it from around 32 weeks of pregnancy, but not before, starting with one cup a day and building up to three cups a day until labour. It is not thought to bring on labour, but to help it progress in a steady way.”

Fitz-Desorgher agrees and says it’s better to take the tea itself than to take the tablets. “Buy the dried leaves as fresh as possible and make a good, strong cup of tea twice a day once you get to about 32 weeks of pregnancy,” she says. “You can carry on taking it right up until you go into labour.”

What are the best raspberry leaf teas in the market?

This tea was voted the best herbal product in 2009, that means that for the past 10 years, it's been one of the best raspberry leaf teas you can find in the market.

This is a refreshing, distinctive, and delicious blend of raspberry leaves made with natural herbs and enhanced with natural raspberry flavour. It's free from caffeine.

This is 100% pure botanical ingredients with absolutely nothing else added. The resealable airtight foil pouch will keep your tea fresher for longer.

If you're not so keen on the flavour of raspberry leaf tea, you can get this version that has peppermint as well.

This well-known tea brand brings you a kosher tea with oxygen-bleached tea bags. 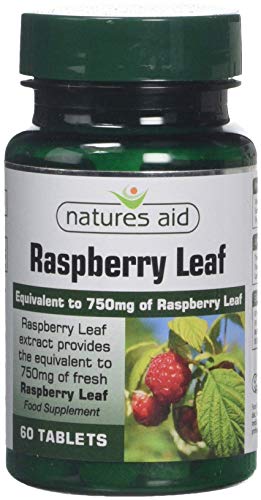 Not a fan of the tea but still want to see if raspberry leaf works for you?

You can always try the capsules. Each daily dose provides 375 mg raspberry leaf extract, equivalent to 1500 mg fresh leaf and can be taken twice a day.

JoviTea is a  raspberry leaf tea produced in Germany. It's 100% natural, free of artificial flavors or additives, flavour enhancers or colourings.